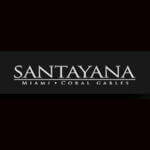 In 1981, Rodolfo Santayana, known simply as Santayana, dreamed of opening a jewelry store where he could sell beautiful, fine jewelry with unique design and timeless style. With the support of his wife Marisa and his teenage daughters, Marisa and Miriam as the very first employees, he opened Santayana Jewelers in Miami.

He set up shop hoping the customers who were so used to him making house calls, would come. Having already cultivated a stellar reputation in the community, Santayana's business grew much faster than he ever anticipated.

Santayana was especially known for his innovative pendant and necklace designs. Over time, his designs became so singular people stopped each other on the street to compare their Santayana pendants. Together with his wife and 5 children, Marisa, Miriam, Patricia, Rudy and Elena, over the next several years, Santayana expanded his original store in Miami, added an in-house repair shop, and opened a second jewelry store in Key Biscayne.

In 2006, Rodolfo Santayana passed away leaving his legacy to his children. Today people come from all over the United States and Latin America to Santayana Jewelers for the same reasons they did when Santayana first opened its' doors over 20 years ago - honest, reliable consultations, unique designs and fair prices.

Please use our Contact Form to reach Gary regarding your current business website.... Learn how a website makeover could help you connect with your best prospects!